While on the island I was tracking this day-by-day, can-by-can. It shows what 45 days on an island will do to your mind… though of course I did start tracking it Day 1… hummm. 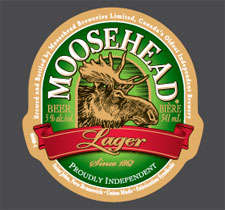 Police discovered 200 cans of stolen Moosehead beer at a marijuana growing operation in the forest near Doaktown, N.B., about 100 km northwest of Fredericton. A few of the cans, from a shipment bound for Mexico that was stolen in August, had been ripped open.

“Six of the cans were discovered with bite marks in them indicating a bear had, at one point, been into the beer,” the RCMP said in a news release.

The release said there was no sign of either the animal or the people who had stashed the beer.

The beer cans, labelled in Spanish, were instantly identified as having belonged to a load of 54,000 cans that disappeared from a Moosehead delivery truck more than two months ago.

The stolen beer has been turning up in various places around New Brunswick since the transport truck was discovered abandoned in Grand Falls, N.B.

Wade Haines of Fredericton, the driver of the truck, has been charged with theft over $5,000 and is awaiting trial.

Alexa is a digital marketer and author with over 20 years in digital & interactive communications in the food and tech industries. Alexa's CheapEats Restaurant Guides, for both Toronto & Ottawa, were Canadian best sellers. She is a recognized authority on social media and has been named one of Canada's 20 Leading Women in Social Media.

Daily Update: day 3 – I got ripped

What do you think? Cancel reply

Egg rolls for dinner? Hell, yes!
So much lettuce, my BLT is flipping it’s lid.
I’m back by my favourite shawarma place @josephs_shawarma in #SchombergOntario. SOOOO good.
Local strawberries and vanilla ice cream on a homemade rhubarb scone.
Love it when you can grab lettuce straight from the garden and it bursts out of your sandwich. This hot capicola and Swiss on a fresh @stphillipsbakery roll was also topped with @longosmarkets muffuletta which really made this sing. Inspired by @chefmattbasile
I don’t know what night it is where you are, but here it is pizza night! 🍕

My first swim since July 4, 2020.
As I’ve mentioned, I am back up at @marbill_hill_farm dog and farm sitting. Luckily there are professional staff here to look after all the horses. Especially lucky to have 3 onsite with yesterday’s tornado warning to get the horses away safe and the barns and equipment locked down.
My morning starts with these 2 on high alert. Mainly because that means they are barking and usually start while still cuddled up against me. So, that was my view at 7am. No sleeping in around here.
Meet Pixie’s pack.
We don’t have any fun together
Missing Pixie? She’s back home at the farm, with me. And loving the ability to run free and bark at everything. And I do mean everything!

5 Most Crave-worthy Treats at the Royal644 social shares